FacebookTwitterYouTubeLinkedIn
5 Things About Video You Should Know

If you read anything about digital marketing or SEO these days, one message is constant:

Video is Google’s sweetheart. In truth, this trend has been emerging for years and for many was confirmed when Google bought YouTube.

SEO experts rave about the ranking effects of including video in your marketing plans. Easy enough for big companies who already have marketing dollars allocated to creating video content for TV ads, but what about Mid-sized to Small Businesses? How can entrepreneurs and business owners add video to their marketing strategy without breaking budgets?

Here is the good news, producing a high-quality video to advertise your business is no longer cost-prohibitive and here are 5 reasons why:

New Video Camera Technology:
The quality of smartphone cameras has only gotten better over the years and will continue to get even better. Did you know that iPhone 6s shoots in ultra-high definition 4K? In 2014, Bentley shot a high-end commercial using the iPhone 5s and shot another when the iPhone 6 came out.

In 2015 the popular TV show Modern Family shot a full episode using iPhones, and in the past two years over a dozen full-length films have used iPhone technology to capture pick-up shots.

What does this mean to business owners? Simple, affordability! Ultra-high definition video worthy of Hollywood is available in modern smartphones. Now that skilled video producers do not need expensive equipment or even studios to produce high-quality videos, the cost of getting a great marketing video for your business is much more affordable.

Quality of Sound:
A common protest by those still married to their pricey equipment is sound quality. Admittedly, on their own, smartphone mics pick up a lot of ambient noise that can erode the sound quality of your video. Also, there are certainly times when a properly set-up sound studio is the best option.

That said, new technology in lavalier microphones for smartphones has pretty much-eliminated sound concerns. Lav mics have long been used in television, theatre, and public speaking, and they are a completely reliable and proven tool for sound capture. A professional video producer often has one or a few different lav mic models to ensure sound is captured crisply and with minimal interference.

Beware The Naysayers:
The episode that Modern Family recorded using iPhones is indistinguishable from their other episodes. That Bentley commercial? Has as much swag as any recorded using traditional video cameras. So why is there still resistance to smartphones as legitimate tools for video production? Well, here are the two primary reasons I have encountered:

First, many traditional videographers hate this emerging technology because it threatens to make thousands of dollars’ worth of video equipment nearly obsolete. I can understand their position, they have expensive equipment, often have high-overhead studio space and need customers willing to pay thousands of dollars for a video to pay for their operational costs. Also, these studio companies often have a film crew and the more people involved the more people have to be paid. Usually, in a larger company, the camera technician and the editing expert are not the same people.

Second, even though iPhone video production is typically a fraction of the cost of traditional videography (typically $500 or less as opposed to $1,500 and more), customers still balk a little when they see a smartphone as the primary video tool. The challenge is that customers are still impressed by fancy equipment, even though newer smartphones typically have equal or better video output than the bigger, expensive video cameras – especially if the video camera is more than a couple of years old. Technology is changing fast and smartphones are at the leading edge. Don’t get me wrong, I know that traditional cameras and production methods are not going to go away. There’s definitely still a need for it, but, I just don’t see the need for a film crew and a huge hit to a business’s bottom line if there’s another option available.

A Good Videographer Matters:
Now you may be thinking “If my smartphone can take great videos that means I can make my own promotional video, right?” The answer is maybe, but it’s unlikely for three main reasons: 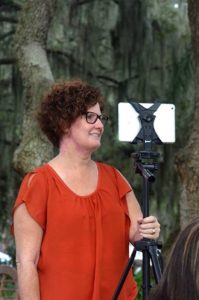 ModernConceptMediaFirst, it’s not necessarily the tool but having the talent to be able to use it. We can all use a paintbrush but we certainly are not all painting like Picasso. To produce a quality video you need to understand lighting, positioning, settings, sound quality, etc. You also have to know how to visually tell a story so you can keep viewers engaged and promote your business properly. Nothing hurts a brand more than advertising that looks sloppy or unprofessional.

Second, even if you had all the technical expertise and talent, will you get the videos done? I have several video-savvy clients that use my services because they know that they will never do it on their own. Developing the concept, creating the storyline, setting up the shots, doing the recording and then the editing – all that takes time and planning that most business owners do not have to spare.

Finally, the editing it’s self. If you have ever watched the Oscars, you know that Academy Awards are presented for Editing. Why? Because no movie ever went to the theatre the way it was shot. Every video requires editing, even a perfectly recorded marketing video needs branded Intros and Outros. Recording the video is just the start. Next, you need the right equipment and software to edit the video into its final form.

It Doesn’t Have to Cost a Lot:
Good video doesn’t have to be expensive. Most traditional video companies charge between $1500 to $3000 for a 30-second video. If your social media campaign strategy calls for one video a month, you are looking at a video budget of at least $18,000. Using iPhone technology, lav mics, and Apple editing software, I can produce the same quality videos with prices typically ranging from $300 to $500 for a 30-second video. That means that your 12-month social media video campaign starts at $3,600 for the entire year, instead of $18,000 that’s over $14,000 saved for the same quality of the video.

When technology begins to transform an industry, there are always questions and even resistance. I hope this article helps you better understand the advances in iPhone videography.

Google loves video and gives the same weight to quality videos produced by Modern Concept Media as it would to a video you spent three times as much to have made. If you have been avoiding video marketing for your business because of cost, be aware that there are now lower cost and high-quality options that can help you put your business on the map. Have questions? Contact Diane Kutz at (727) 481-4499.